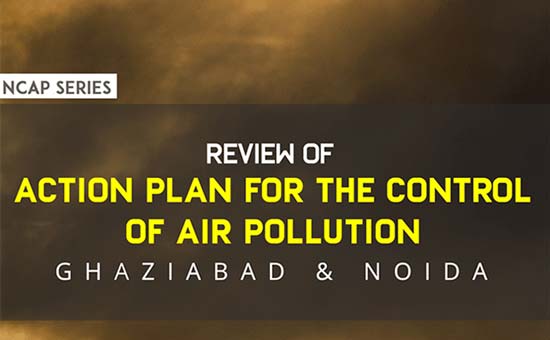 Cities with poor air quality across India that do not match the National Ambient Air Quality Standards of 2009, have been termed as non-attainment cities and ordered to form “city action plans”. These plans lay out the roadmap and specific tasks to be performed to reduce air pollution in the city. This report is a review of such plans prepared for neighbouring cities of Ghaziabad and Noida. The action plans are intended to control vehicular emissions, suspension of road dust, and other fugitive emissions from biomass/crop residue, garbage/municipal solid waste burning, and construction and demolition. The action plans for both cities are identical in terms of actions proposed and their timelines, which led to a joint review report. This analysis finds that the same action plan for two cities with different industrial profile and pollution sources is unreasonable. Overall, these plans merely reiterate existing regulations instead of data-backed ideas or targets. To see any improvement in the air qualities of Ghaziabad and Noida, new plans need to be formulated as the current ones are highly ineffective.
Download Report
Tags: Air Pollution, All Reports, City Action Plans, National Clean Air Programme, NCAP